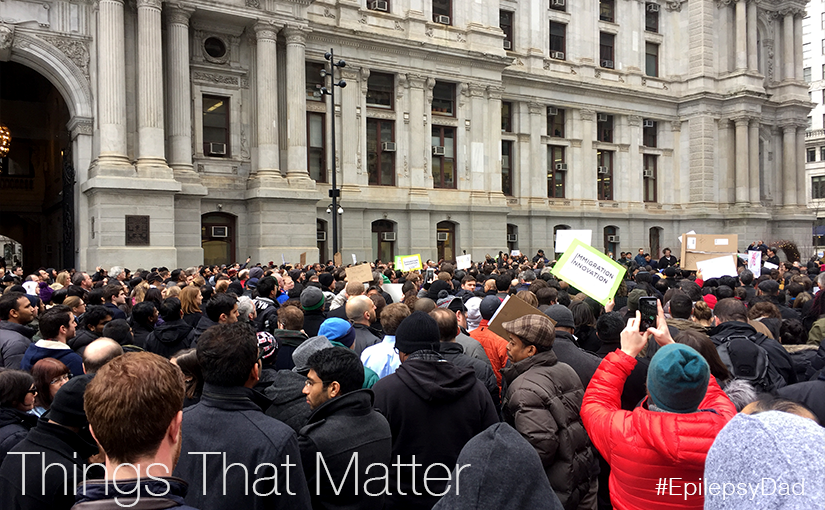 I’ve lived my life in a bubble.

When I was young, my mother worked hard to provide for my sister and me, and I remember that struggle. But when my stepfather entered the picture, life got easier. We did fun things. We camped every summer on the beach. We had a house, and food on the table, and an Atari 2600. We weren’t rich but I always had everything I needed.

After high school, I went out on my own. I lived my life largely without incident. I joined the Army “between wars”. I went to college debt-free funded by the GI Bill and my employers. I got a job in an industry that pays well and provides affordable insurance and other benefits.

Even though I have traveled the world, I always felt isolated and unaffected by it. Wars were fought by others and were very far away. Elections were about issues that I had no reference for. The rhetoric was noise in a system designed for winners and losers instead of compromise. The talking points and issues didn’t relate to me so, even though I voted, I didn’t really participate. I stayed in my bubble and carried on.

They say that having a child changes you. When my son was born, a tiny hole opened in my bubble. It was large enough to let in more joy, and fear, and hope than I ever thought possible. At first, it was overwhelming. I looked through that opening and saw the world, in many ways, for the first time. The world that I would leave for my son was cruel and selfish but hopeful and changing. Instead of opening the hole more, though, I pulled my family through it and the bubble again closed to protect us.

When my son was diagnosed with epilepsy, the bubble began to disintegrate. I could see it happening. The outside world became clearer as the layer of protection around us grew thinner. Even with health insurance, the medical bills added up. There were “maximums” and things not covered by our plan. The “pay later” designation of our plan lived up to its name. I finally had a reference, so I wondered what this was like for someone with no insurance at all.

Then when my son was finally able to return to school, he was going back in as a child with special needs. If you haven’t gone through the process, there is no adequate way to explain it. The fear and frustration that comes from trying to prove to a system that sees your child as a financial liability that he needs and is worth the extra resources is anguishing and exhausting. And you get to redo it every year, for every grade, until they hopefully graduate.

Eventually, the bubble that I had lived my whole life in burst under the pressure from the outside world. Now, I am paying attention. Now, there are things that matter.

There are debates about changing health care laws. That matters. My son has a disability. I have to think about what it will be like for him to try to get insurance with a preexisting condition like epilepsy. Could he even get it if the laws change? Could he afford it? Or is he destined to rack up medical bills for the rest of his life and struggle financially?

My son also has learning difficulties. At school, he has an aide and has special accommodations to help him. These services are expensive and privatizing public education means my child is a drag on the bottom line. Even the placement of the bar these services should help him reach is under debate. Should these services help him keep up with his peers or provide “just enough” to make him functional. That matters, too.

So, when my coworkers staged a walkout to protest the immigration ban, I joined them.

I would have gone anyway. Many of my coworkers and friends are directly impacted by the ban and I wanted to support them. But I went for myself and for my son, too. Intolerance of any kind is dangerous, is not who were are, and does not represent the world that I want my son to inherit. That matters most of all.