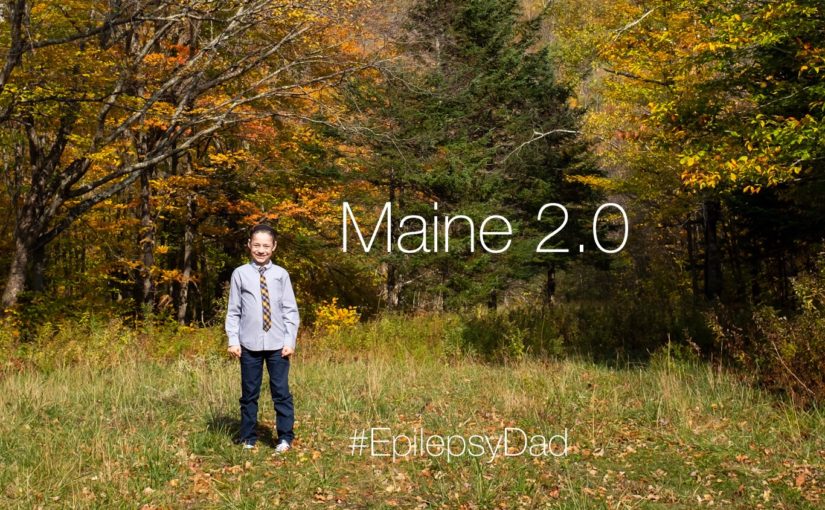 For the second time during the pandemic, we’ve run away to Maine.

I’m starting this post on our first morning in the cabin. My son is at the dining room table, doing virtual school with my wife. The fog is starting to lift, and I can see out the window through the trees and across the secluded cove of fresh seawater that salts the air.

It’s surreal. Many years ago, my wife and I talked about living a more nomadic life, traveling around and doing work and school wherever we happened to find ourselves. I would work in a kitchen somewhere in Europe, and we’d drink wine and play music at night. Back then, I cooked more adventurously, and we drank, and we played more music.

But over the last few years, the practical part of me that optimizes for safety and comfort, when given a choice between planning that future or turning it into only a dream, chose the latter. I needed a job with good insurance. We needed to be near a hospital and a pharmacy. My son needed special accommodations at school. In a world with unpredictable seizures, changing medications, and endless speed bumps, we needed stability anywhere we could find it.

Over the years, as my son’s condition started to normalize, even if not stabilize, we’ve started to venture out further. At first, it was back to Colorado or Florida, places where we always had the security of friends and family around us. We’d go for a week at a time to the Poconos, still only a few hours drive back to the city and its services.

Our first big trip was to Hawaii, where we stayed for almost two weeks. Even though we were with friends, it was the first time since the seizures began that I felt like we were disconnected from the constant watch and care of our safety net. Sure, there were seizures on the plane and in the hotel and on the beach, but we embraced the adventure.

The next big trip was to Panama. Again, we went with friends, but this time we spent part of our time deep in the mountains away from any major city, and the other part on an equally isolated island. There were seizures on the plane, and in the mountains, and on the island. But I felt even more disconnected there but still safe.

When the pandemic started and we knew that I was going to be working remotely for the foreseeable future, we decided to pack up and head to Maine for a month. It was just us in a small house in a remote town along the ocean, but I felt like we were actually living in another place. The seizures followed us there, too, but I was working, my son continued his school work with his tutor, and my wife was writing and working. We visited the grocery store, cooked, found a pizza place we liked, and continued our lives, just in a different place. Now, we’re doing it again.

I don’t know if that truly nomadic lifestyle will ever be in the cards for us. I hope to embrace more working from home, assuming working from an office is ever a thing again. But that voice in my head is also whispering words like stability, and doctors, and pharmacy. It’s telling me that the world is going to get back to normal, and that a job requires an office to go to, and that we need the safety of benefits and insurance.

But it is in those moments where maybe I need to remember where we’ve been. More so, I need to look around at where we are right now. And maybe I should step outside and go for a walk and reconnect with being disconnected. And be open to a different future where everything is still possible.