Today kicks off week 3 of the Epilepsy Blog Relay when the theme changes to Tech and Innovation in Epilepsy. As a technologist and father of a child with epilepsy, this week represents the intersection of my two worlds. I am excited to be writing this week because of the promise of technology in managing epilepsy.

The Story So Far…

More than a year ago, I found a crowdfunding campaign for a wearable device that could detect seizures. At the time, we were struggling with detecting and recording my son’s seizures. It was difficult because he had many types of seizures and we knew from EEGs that we weren’t catching every one. The seizure devices already on the market didn’t work for him. Most used accelerometers and gyroscopes to capture exaggerated arm movements or falls. But his seizures often only created subtle body movements that were not detected. This new device included other seizure markers, such as galvanic skin response. I hoped the new sensors would make the difference. Since the device showed promise, I backed it and then anxiously awaited its release.

After a long delay, the device finally shipped. When we received it, I strapped it to my son’s wrist and hoped. The next night, my son had his usual handful of seizures but the device didn’t detect any of them. Initially, I thought I had configured the device wrong or that it lost connectivity to my phone. But after a few weeks of seizures with no detection, we stopped wearing the device and put it on the shelf.

Our story is one of many similar stories of unrealized expectations. But this post is not one of failure and despair but one of hope. While the device didn’t work for us, it does work for some people. Moreover, better methods of seizure detection continue to be developed. These techniques are being included in the growing number of wearable devices on the market. Soon, we’ll have clothing and accessories capturing biometric markers that will be able to detect seizures more reliably. We’ll have data captured that we’ll be able to use to predict when a seizure will occur. And this will happen in the very near future.

There are three components necessary to create a device capable of detecting and predicting seizures: devices, data, and machine learning.

The devices represent the things that are collecting data. Today, we have wearables like watches and clothing that have sensors in them. These sensors measure some attribute such as heart rate, steps, or stress level. The trend towards smaller, cheaper, and more energy-efficient sensors will continue. New sensors to measure new markers will be created. Manufacturers will be putting sensors in nearly everything they create. The result will be a wealth of information streaming from us at all times.

With the proliferation of sensors, the result will be a tsunami of data. Every measurement and data point we can collect will be available in near-real time. We’ll have access to data that required equipment at a hospital to measure. We’ll also be able to correlate that data with information from the world around us. The outside temperature, what our thermostat is set to, what we ate, how much television we watched. The more things we connect and make available, the larger the pool of data we will have with which to swim in and find answers.

The component that I am most excited about is machine learning. Now that we have all of this data, what do we do with it? It’s too much data coming in too fast for a human to make sense out of. So we use machine learning to try to make sense out of it for us. We can train a system using real data so that, over time, it can use what it learned to predict better than a human can. It can find patterns in data that are invisible to us and make connections that we can’t. It can figure out when the data is aligning in a way that previously resulted in a seizure and notify us. It can help adjust our behavior in a way that reduces our risk of a seizure. And it will never stop learning and will continue to make more accurate predictions. 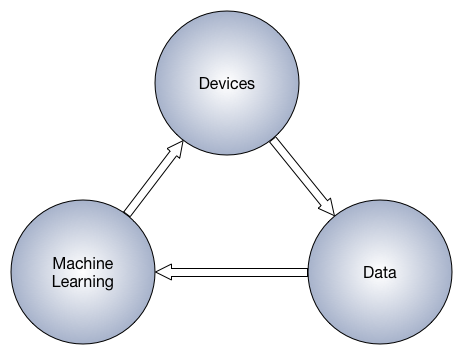 As depicted in the image about, machine learning isn’t the final stop. Instead, we will use the algorithms we develop to feed back into the devices. We’ll create new sensors to fill in our gaps in data. We’ll push the intelligence further down to the device to allow it to make smarter decisions closer to the person wearing it. The updates to the devices will result in more data, or better, more refined and reliable data. That, in turn, will make our predictions better. The cycle will continue to a point where many devices will be able to detect and predict seizures. It won’t be the job of one specialized device but, instead, a collaboration of things we wear everyday.

There are challenges ahead. Securing the data and privacy are two top concerns. Battery life and powering the devices and sensors follow closely behind. These are huge problems and concerns. But just as there are trends impacting the components above, these challenges are not unique to wearables. Advancements in encryption and identify management will make their way into wearables. New battery and wireless charging technologies will keep our devices powered longer and without us thinking about it. A rising tide lifts all boats, and wearables will benefit from much of the same innovations as other technologies.

Even though our current experience with wearable devices to predict seizures has been disappointing, I am still optimistic. The trends in devices, data, and machine learning will continue to result in more reliable detection and prediction of seizures. In the near future, we’ll have these capabilities in everyday wearables, not just in specialized devices. The result will be a dramatic increase in peace of mind and in overall quality of life.

Don’t miss your chance to connect with bloggers on the #LivingWellChat on June 30 at 7PM ET.