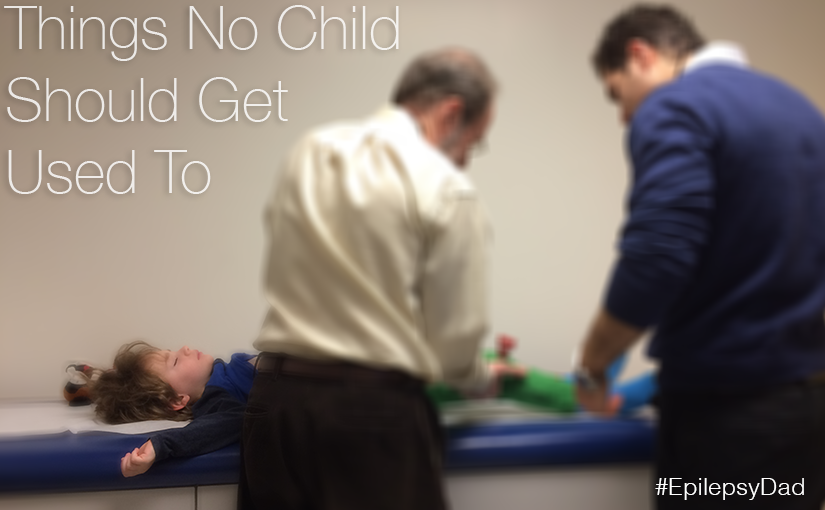 A few weeks ago, we went to the children’s hospital for an appointment. We walked through the large, automatic doors and up to reception where my son said hello to Mary (they’re on a first-name basis), who commented that she liked his red hair. Without needing to ask, she pulled our family up from memory on the computer and printed our visitor badges.

Check-in completed, my son led us up the main staircase to the second floor. At the top of the stairs, he turned left and headed down the long hallway towards neurology. He knows his way around the hospital and which building to go to for neurology, or speech, or another test. As I followed him down the hall, it made me sad to realize how well my son knows his way around that place. A child should know his way around a toy store, not a hospital.

As we turned the corner, we passed phlebotomy. There were nervous parents and children in the waiting room, and seeing them sitting there made me think of the times we were in those chairs. The first few times, we were nervous, too, but after too many visits, we got used to it. Now, my son likes to talk to the phlebotomist as she prepares the needles. He politely says “No, thanks” after she invites him to look away, and he watches as the needle pierces his skin. “I never cry”, he says, which is almost true in the hundreds of times he has been pricked and pierced. “You should come here more often to show our other patients how to do it,” we’ve heard more than once. “Ok, ” my son replied, “I’m really good at it.” As I remembered him saying that, I felt sad. That’s not something a child should be good at.

He knows the routine of the physical exam, not because he has had years of exams under his belt, but because he has had so many in the short time he’s had epilepsy. These doctor visits, the trips to one of his therapists, the emergency room visits, they’re part of his routine, those things he’s done so many times now that he just does them because, well, that’s what he does. All these things are now just part of our lives, are part of his life, like eating, and breathing, and going to the park. He wakes up and takes a handful of pills, and another handful at night, without question, because that is what he has to do. He doesn’t get to eat the food that his friends do, and he can’t just have a snack, it has to be weighed and measured because that’s how it is and he’s used to it. He doesn’t look at a restaurant menu because he knows he can’t order from it, and he’s used to that, too.

He’s getting used to having seizures. He’s crying less after he has one in the middle of the night and more regularly just putting himself back to sleep. If he forgets to put on a pull-up and needs to change, I’ll often catch him on the floor halfway through the process by the time I get to his room. He’s getting more aware of his seizures, too. He had one on the basketball court the other day. When I asked him if he was okay and if he knew what happened, he replied, “I had a seizure, but I’m ok.” It rolled off his tongue so casually it was as if he was describing a shot that he missed or if he had tripped on a rock and fell.

On one hand, I’m grateful that he has accepted these restrictions and these changes in his life so easily. I am not sure that I have the strength to constantly explain to him why he has to do these things when I am still struggling with my own questions. Why is this happening to him? Was it something that came from me? Is this our lives forever?

On the other hand, if I think about the things that he has gotten used to, it breaks my heart. This condition has taken away too many things from the one person who I desperately wanted to open the world for, and I’m having a hard time resolving that discrepancy.

I try to think about the positives in this situation, but most of the time I just see a little boy who has gotten used to too many things that he shouldn’t have had to.

11 thoughts on “Things No Child Should Get Used To”