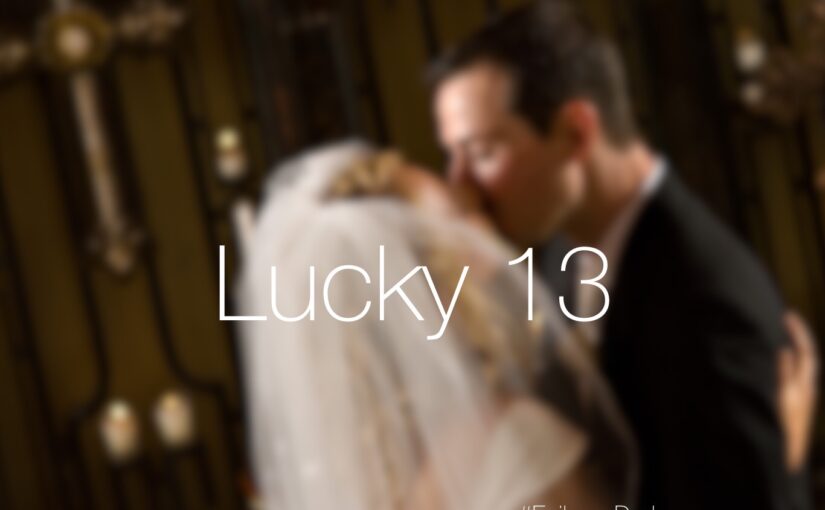 This week is my wife’s and my 13th wedding anniversary.

When I think back to how it all began, it seemed improbable that we would have ever met. I was a software engineer working in a Colorado suburb, and she was an actress and musician running a musical theater school in the foothills. We traveled in different worlds that had little overlap. But we both had friends that encouraged us to try online dating, and my favorite algorithm of all time is the one that decided that we were a match.

We started slowly. We spent months getting to know each other over e-mail and texts. The first time we talked on the phone, I was visiting my parents and pacing around their pool like a nervous teenager. When I returned from my trip, we finally had our first date and our first kiss.

As our relationship continued, I started to see more of her world. On one date early on, I sat at a table, nursing a drink, watching her sing on stage. I still smile when I think about it. I was already in love with her, and there was something transcendent about watching someone you love doing something they love.

At the time, I was learning about photography, so I became the official photographer for her school and began to take photographs of the performances. I would see her share her gift with the children and watch as they put on these incredible, professional performances. What she was able to draw out of these kids and the way she did it was inspirational.

The more time I spent in her world, the more amazed I became. She brought things out of me, too, that I didn’t know anyone could. It was challenging at times, and I didn’t always handle it well, especially when what was coming out collided with my baggage and fears. But I was growing, and we were growing together, and I knew that I wanted to spend the rest of my life with her. Our wedding day was a wonderful, blurry blending of our two lives.

Almost a year after we were married, our son arrived. We didn’t have much time to explore life as a married couple, and the change and the challenges of being new parents strained our relationship. My wife had to take a break from teaching, and I only had a few weeks off before I had to return to work. There were hard days, but we were so grateful for his presence, and we did our best to figure it out.

Eventually, we found help from an amazing nanny and my wife could return to work. She found her groove with the school and managed to juggle being a business owner and being a mother, and one of my favorite pictures from that time was when our son played the baker’s son in Into the Woods.

I was slowly advancing in my career, as well. When my company offered me a position that required moving to Philadelphia, my wife didn’t hesitate. It’s only in hindsight that I can even begin to appreciate how much she gave up to support me in that move. But it was only the start of the things that she would give up.

On their first trip to Philadelphia, my son had his first seizure. It was not the introduction we hoped for to the city that would become our new home. But it was one seizure, and it didn’t stop our move east.

The second seizure came as my wife and son boarded an airplane a few months after our move. She managed to get him off the plane and rode with him in the ambulance to the children’s hospital. By the time I met them at the hospital, my son was stable, but my wife was understandably shaken.

In the months that followed, my son’s condition only got worse, and my wife was the one who was with him every day. I would go to work, and she would be alone with him in the house in a city where we didn’t have any family or support outside of what we received at the hospital. When my son’s condition got so bad that he needed to be admitted, and when we discovered what “Keppra Rage” was, and when we thought we were going to lose him, she was the one that bared most of the burden, and she is the one that essentially pulled us through.

Over the next few years, my wife would start teaching music or singing with kids of families we met through school, but it was hard to keep the momentum going. Even as my son was becoming more stable, he still couldn’t do full days at school. Some days we’d get a call from the school nurse, and my wife would need to go pick our son up. Some days he would seize so much that we couldn’t send him to school at all, and my wife would stay home with him. The unpredictable nature of our son’s condition made it impossible to have a fixed routine or plan too far out into the future. She was constantly forced to rearrange her schedule or cancel her lessons last minute. It became too hard to manage so she would stop doing those things so that she could focus on our son.

Often after the stress and frustration had gone beyond the breaking point, we would try to bring in someone to help at home. But the erratic nature of our son’s condition and the impact on his day made it hard to schedule help, too. We paid a nanny to be on standby in case we needed to pick my son up early because there was no one else we could call. But that wasn’t sustainable financially, so, again, it fell to my wife to give up the things she wanted to do.

When the pandemic hit, it initially felt like a relief. We were home together and I should be able to help more. But it didn’t start well. Even if I wasn’t going to an office, I would still disengage and disappear behind meetings during the day. My wife was still the one that carried the responsibility of taking care of our son.

When the new school year started, we tried a dedicated virtual school. Even the haphazard attempt at going virtual by my son’s brick-and-mortar school helped with his anxiety, so we thought it might be a better fit. My wife was supposed to serve as the “learning coach” who would monitor progress and step in if our son got stuck. But it turned into another full time teaching job. My son struggled with the structure and pace of virtual learning. He had a hard time keeping his focus and attention and wouldn’t know what he was supposed to be doing. My wife spent every minute keeping him on task, or helping him do the work, or trying to teach him whatever he didn’t pick up from the teacher. She was in the room with him all day, watching him struggle and watching him fall further behind.

Around the same time, she also recognized that it was time to move out of the city. We got lucky and found both a school and a house in a nearby suburb. When the neuropsychologist said that the best thing we could do for my son after we received the results of his latest test was “find him a school” and “find a way for him to be around other kids,” we had already done both of them thanks to my wife.

As we are settling into our new life, I’m seeing my wife start to come alive again. She’s starting to do the things that she was meant to do. She’s teaching a few students in the city and talking about starting a class. She’s working on a book. She’s putting herself out there in those ways that inspired me to do the same all those years ago. It inspires me even more today.

I am so grateful to be on this journey with her. There is no way for me to balance the scales, but I can keep working at being the best husband and father I can be. I can keep looking for ways to lighten her burden and to support her as she has more capacity to find herself again.

After so many years of putting others first and being forced to give up so much of herself and what she needed, maybe this is going to be her year.