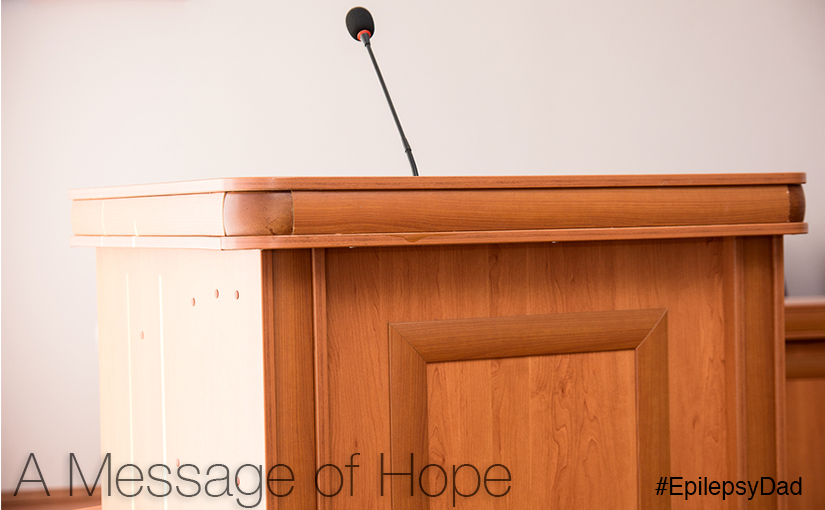 I was nervous walking up to the doors of the classroom. I put my hand on one of the door handles, leaning in close, hoping to hear the conversations in the room. I turned slightly and could see in to the room through the gap between the two doors.

The tables were arranged in a “U”. The door that I was hiding behind was in the back of the room, so I saw the face of the presenter and the backs of the heads of some of the attendees. Shifting left and right, I could see the sides of the faces of those seated on the sides. I took a deep breath, turned the handle, and quietly walked in to the room.

As I came through the doors, the presenter at the podium and other staff smiled and greeted me quietly and warmly. A few of the attendees…parents…turned briefly to look at me and then back to the presenter.

As I moved to a seat in the back of the room, the presenter said  “…and you will hear from one of our parents shortly” and gestured towards me. I sat, flashed a smile and casually nodded as I made eye contact with the other parents that were now looking in my direction.

I pulled open my laptop, pretending to make last minute changes to my slides (that were actually not mine, they were my wife’s). I wasn’t ready for eye contact. I took a few deep breaths and tried to calm my nervous energy.

I had been in this room before. Just over a year before, I sat where the other parents were sitting, learning about the ketogenic diet. Like these parents, I was there because I had a child with epilepsy that was not responding well to medicine. Like them, I was scared…about epilepsy, about the future, about how scary and terrible and daunting the diet seemed to be. Like them, I was there trying to find hope.

The keto team at the hospital puts on these information sessions once a month, giving the dirty details of the ketogenic diet as a treatment for epilepsy. The day is filled with the history and the application of the diet. There are demonstrations of how a meal is measured. The social worker talks about support during the journey. And at the end, the grand finale, a parent of a keto kid takes the stage.

On that day, that parent was me.

My mind kept going back to when I was in the class. We had only been out of the hospital for a month or two, and my son was still seizing, still not responding to medicine, and still having side effects from the medicine that he was on. I was still reeling from the trauma of his ongoing condition. My wife had to stay home with my son, so I went to the class alone…cared, overwhelmed, and alone.

I remember being more buried by the information that was being presented. The diet works for some people, not for others. The diet is hard work. Thoughts of what was happening to my son mixed with the sad possibility that the diet wouldn’t work, or that it would but he wouldn’t be able to scarf down a bag of potato chips or eat a candy bar. By the time the parent speaker, Amy, stepped up, I was raw.

Amy talked about her son who was on the diet for two years. She talked about how the diet worked for them, and that it was hard at first, but became easier. She shared some of her tips, and she brought her son in with her and he sad quietly eating his snack…a snack that looked like a normal snack, except for the shot of oil at the end. After the class, I talked to her, and we talked about what was happening with us, and I asked if my wife could contact her. She said yes. Because, as I’ve learned, we’re all in this together, and we need to support each other, because no one understands what we’re going through like other people going through the same thing.

I scanned the room. One mom who was too overwhelmed and had left the room was making her way back to her seat. The other parents looked exhausted after a long day. And now, they were looking at me.