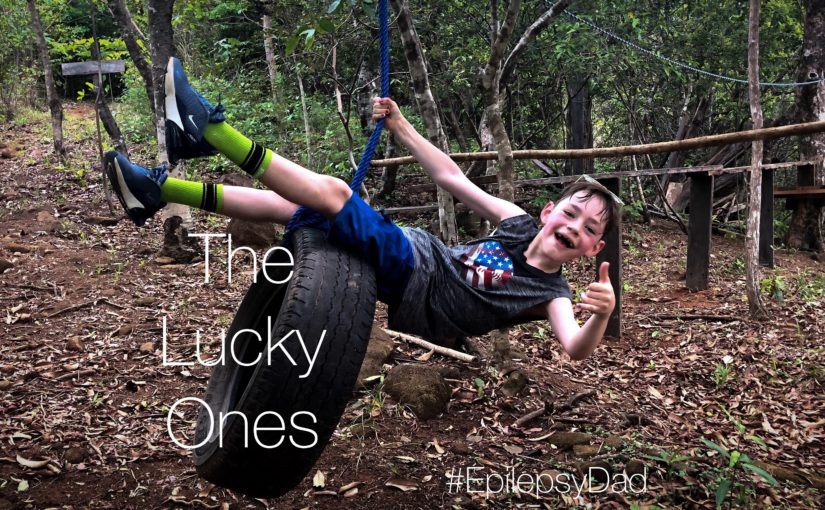 I woke up early, like I do on most Sundays, and went for a run. When I returned, I was greeted to my favorite sound in the world when my son said “Hi, Daddy. Happy Father’s Day!” as he handed me a card that he made himself and a big hug.

Being a father is the most amazing experience of my life. It’s also the hardest, most fun, most frustrating, most rewarding, and scariest experiences of my life. I feel the pressure to give my son a very different childhood than I had and, most days, I feel ill-equipped to do so, but I am trying.

Adding to the challenge of just being a good father is being the father to a child with special needs. Even if there were a manual called How To Be a Good Dad, it’s the equivalent to trying to read that book in the dark. Every intention, every plan, every expectation went out the window and I had to start again looking through a very different lens.

I’m not just a father. I’m an epilepsy dad.

When I became an epilepsy dad, I started this blog so that I could share my experiences navigating this new world. Five years in, here are a few of the things I’ve learned:

I may never know why this happened. I’m an engineer, a problem solver. I’m used to finding the reason why something is broken so that I can fix it. After countless scans and genetic testing, there is no identifiable reason why my son has seizures. But not knowing why and living in denial doesn’t change the fact that he has epilepsy.

It doesn’t matter why this happened. There is nothing that I could have done differently. Even if there was, there is no way to go back and change it. Looking backward and wondering why takes me away from the present, from my son, and from our future.

Plans change. I think as parents we all have grand plans for our children when they are born. But as our kids get older and discover what they want, those plans change. This is no different, even though I want to be mad at epilepsy and blame it for the changes. My son was always going to find his own path and, in some way, epilepsy will influence his course. But that is not a reason to give up on the future. It’s a reason to accept that plans change to support him on his journey of discovery, which is what a good parent should do, anyway.

There is a lot to be grateful for. Five years ago, we almost lost our son when the doctors couldn’t get his seizures under control. The pressure and fear and anger that I have felt in the last five years placed a strain on my relationships and on my marriage. But today, my son plays baseball and makes me the most amazing cards on Father’s Day. My wife and I are closer now than we have been in a long time. The situation hasn’t changed, but we have and I am grateful every day that we are together.

You can’t be an epilepsy dad without being a dad. At the end of the day, I’m still his dad. We still have fun, and laugh, and joke, and have pillow fights right before trying to take a nap. I still need to teach him good values and show him how to be a good person. It’s easy to get wrapped up in the worry and the diagnosis and the future but that shouldn’t take away from being a dad first. Because, especially with all the complexity that life has thrown at us, that is what he needs from me the most.

NEXT UP: Be sure to check out the next post by Lisa Hairston at livingwellwithepilepsy.com for more on epilepsy awareness. You can check out any of the Epilepsy Blog Relay posts you may have missed.