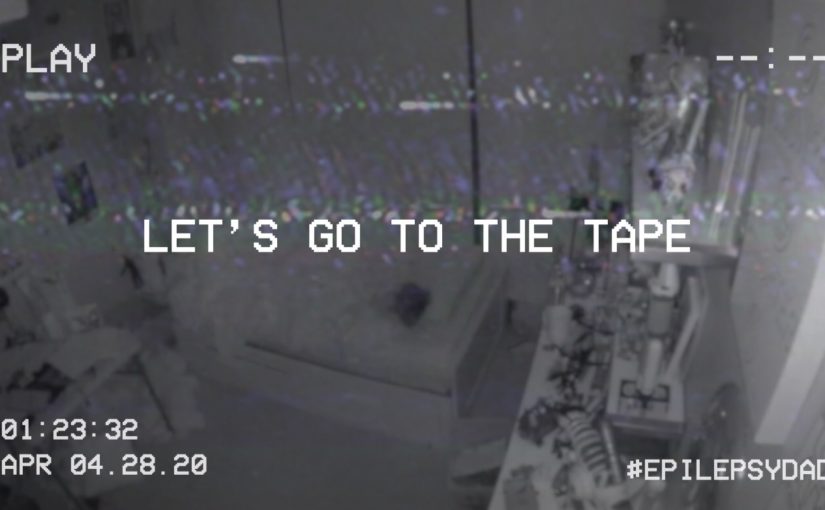 I remember watching sports on television as a kid. There would be a dramatic play or a questionable call, and the announcer would say “Let’s go to the tape”. Instantly, the previous play would be on the screen and analyzed by the commentators and the millions of people who were tuned in. They would collectively be looking for conclusive proof that the play went one way or the other, and the outcome of the review had the power to change the course of the game.

Every morning, I go to the tape. But instead of reviewing the result of a questionable call, I’m scrubbing the recorded video from my son’s monitor to see if he had a seizure. I’m looking at clips from each time the camera detected motion to see if it was caused by normal turning over or if a seizure had taken control of his body.

More often than not, there is something to see. Even though his seizures are short, most are easy to catch. There is an unnatural silence in his room as his breathing stops and his body stiffens. A few seconds later, the loan moan fills the room as his body jerks and his arms move.

As I watch the video, I’ll see myself enter the frame. I’ll sit on the edge of my son’s bed, rub his back, and try to comfort him. Once the seizure ends, I’ll help him get back into the middle of his bed, cover him with a blanket, and walk out of the camera’s view, heading back to bed myself.

I’ll also see more subtle seizures. Ones where there wasn’t a sound. Ones where I didn’t wake up. Ones where I didn’t come into the room to comfort him. These are the ones that remind me of reviewing a play from a game. I’ll watch the same clip multiple times. I’ll slow it down. I’ll turn up the sound. Did the player come down in bounds? Did my son’s body stiffen? Was the play offsides? Did I hear the faint sound of a seizure?

The difference is that I’m not trying to make a decision on a play that will determine the winner or loser because there isn’t one. This is a match that may never end. Instead, it feels like I’m using these reviews to determine the score and, most nights, epilepsy gains a few points.

But I’ve got a lot of other tapes to review, as well. Videos of my son playing baseball, and laughing, and doing a lot of things that he couldn’t do a few years ago when epilepsy was controlling the game. So if we get points every time my son does something he couldn’t do before, or just something amazing, then we’re racking up points every day.