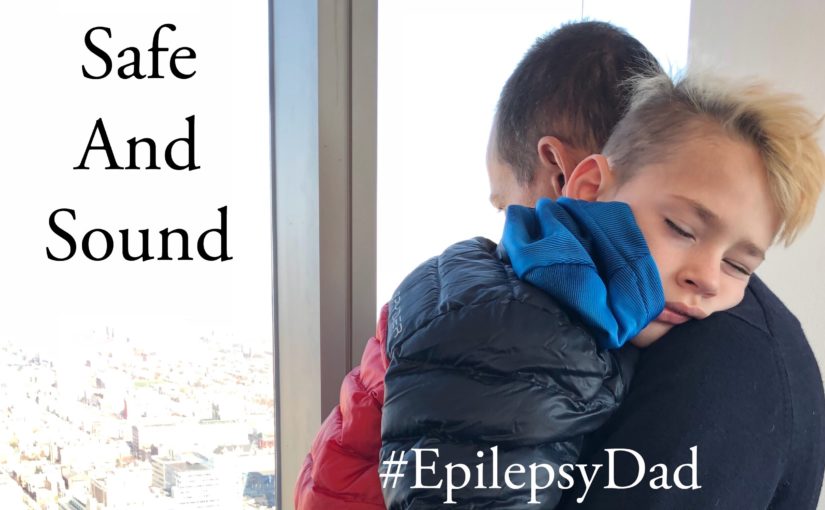 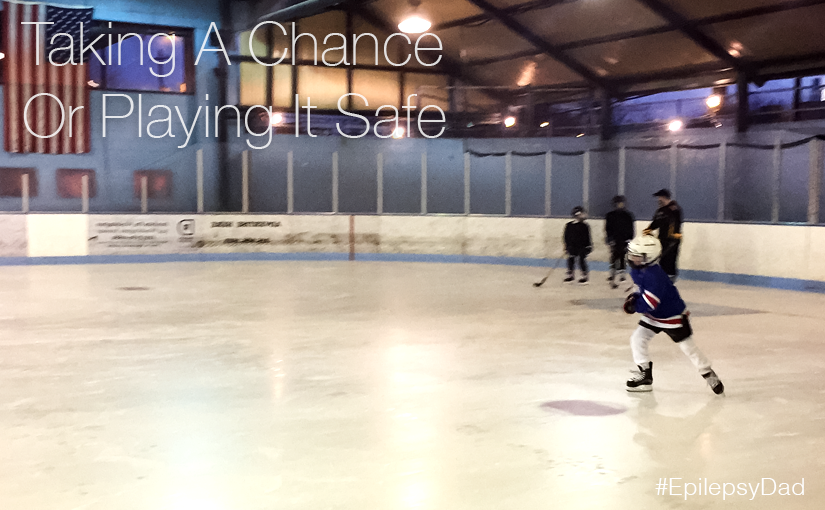 I should have known there was something wrong when my wife texted me that our son had a seizure in school. Seizures during the day are rare for him, but I thought that maybe we wore him out sightseeing with his cousin who was visiting over the weekend. That was an especially bad day to break from his nocturnal seizure pattern because that afternoon he was supposed to be back on the ice for his first hockey class since his seizures started more than two years ago.

When we lived in Colorado, hockey was all this kid wanted to do. We played hockey on the floor since he could walk. We even made a movie about it.

He started skating when he was around three, and he started his first hockey class just before we moved to Philadelphia, which also happened to be the time his seizures started. With how bad things got, hockey and skating were out of the question. Taking away something he loved so much was one of the cruelest things that epilepsy did to him.

It took almost a year, but once he started to regain his balance and stamina, we found him a coach to do off-ice drills with him. We continued to play hockey on the floor or at the park, but he would always ask when he could get back on the ice. I didn’t have an answer.

After nearly eighteen months, we let him back on the ice. It was only for short periods of time because his balance, stamina, and attention issues still prevented anything too rigorous, but it was something. To a kid that loves hockey more than anything else, though, it’s just skating. There is something different about doing it in full pads, with a hockey stick, and surrounded by other hockey players and we weren’t there yet, although that was about to change if he was well enough to go to this new class. After more than two years, he was about to return to where he was before the seizures started, which is why the timing of the daytime seizure was extremely unfortunate.

We decided to see how the rest of the day went. After school, he took a nap and my wife said that he seemed fine after he rested. We took the chance and she brought him to the rink and I left work to meet them. As I walked in, I saw my son scan the room and realize that he was in a locker room, surrounded by other hockey players. He was so excited that he trembled as he put on his gear. By the time I got there, he flashed a smile and asked me to help him finish getting dressed. Apparently, mommy didn’t know the order things had to be put on in and he had to keep taking something off in order to first put on the thing that should have gone before.

Finally dressed, he tucked his mouth guard into his toothless smile, grabbed his stick, and headed to the ice. It took all he had to not sprint, and he would have if the ice were further away. But he walked up the steps, past the bench, through the door and, finally, onto the ice. He skated around for a minute to get a feel for the ice and then skated over to his coach with the rest of the team. 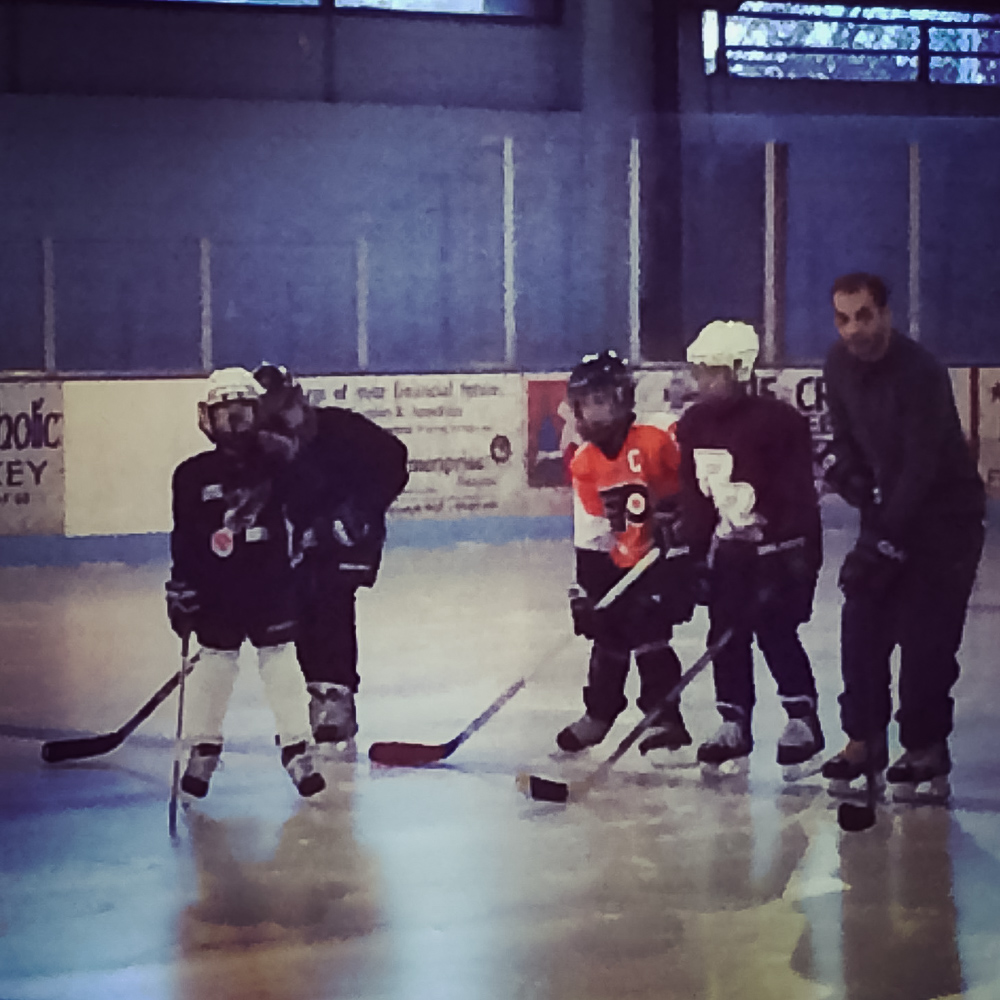 It took all I had to not burst into tears on the bench. My heart was filled with such joy to see my son so happy. We do a lot of cool stuff as a family, but my son also does a lot of stuff that other kids don’t have to. Dealing with seizures, doctor’s appointments, therapy, an impossible diet, more therapy, more testing. He doesn’t have much control over even basic things that his peers do and, for a while, epilepsy had taken from him the one place where he could be himself and do something that he loved to do for himself. But there he was, on the ice, smiling and sending me an occasional thumbs up (which is really difficult to do with a hockey glove on) as he did the drills with (and better than) the rest of the kids. 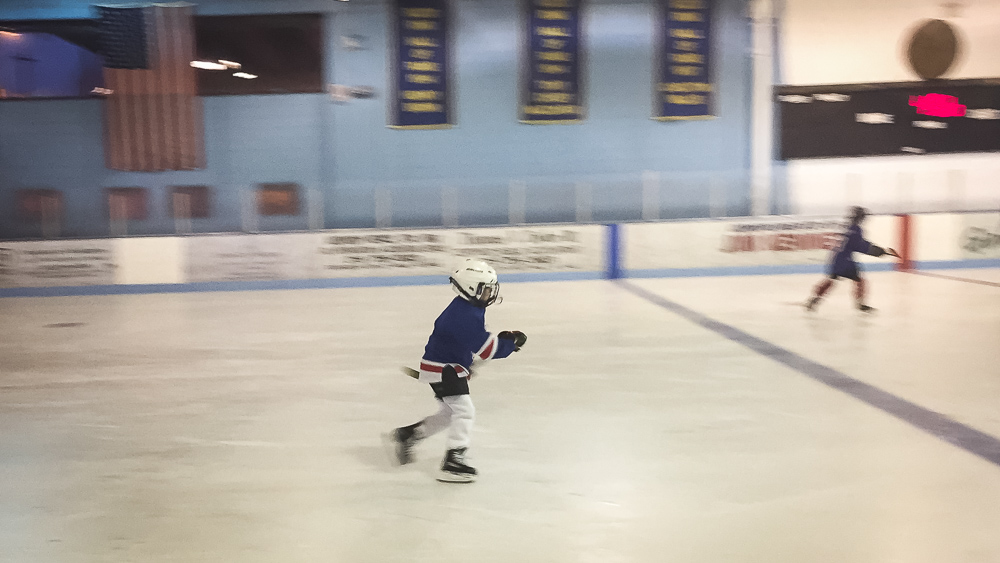 Halfway through practice, though, from across the ice, I heard the sound that I dread every morning and I saw my son slump forward onto the ice. The coach moved towards my son and I yelled, “He’s having a seizure.” “When?” the coach asked. “Right now, ” I replied. As the coach knelt down, my son rose to his feet. I motioned to the coach and he had an assistant help my son to the bench. We sat him down and went through the protocol. “Do you know what happened? Do you know where you are? How are you feeling? Which way is your brain going?”

I told the coach that my son was okay and that he needed a break. The coach mentioned that he’s a nursing student and just happened to start reading about seizures and epilepsy medication. Serendipity. After awhile, my son told me he was ready to go back on the ice. As a parent, I felt faced with an impossible choice. Should I put him back on the ice on a day where he is clearly having more seizures and risk him getting injured? Or should I play it safe and take him home and take away the joy he was feeling? I glanced at my son who was watching the other kids on the ice and I made the heavy choice to let him rejoin his team. As he skated towards the coach, my heart raced and I watched his every move without blinking. Every fall was agony. Did he just fall or did he have another seizure? Thankfully, he would pop right back up each time and rejoin the drill. When class ended, I let out a huge sigh of relief as my son skated over to me, gave me a fist bump, and stepped off the ice.

By this time, he was exhausted but he took off his gear and I helped him put it back in the hockey bag. His eyes were a bit droopy, and I could tell that he wasn’t really there. He had given everything he had to be on the ice and his body and mind were starting to give in. It’s a blessing and a curse that my son wills himself through the things he wants to do and the things we ask him to do. I wish life were easier for him.

When we got home, I put him on the couch and made him dinner. He ate quietly and watched a little television before bed. As I went to get his evening medicine, I noticed that his morning doses were still in the pill dispenser. I asked my wife if she had given him his meds. It turns out, she didn’t. The daytime seizures, the exhaustion…we found the culprit.

Mistakes happen. It’s a lot to juggle four doses of multiple medications a day, a special diet, seizures and the normal chaos that comes with a seven-year-old boy. I felt terrible that the first time back on the ice, his head must have been going haywire. He had seizures. He had to come off the ice. He wasn’t really present. He barely remembered being there. All because we made a mistake on the day that he was finally able to go back to his first love. The poor kid can’t catch a break.

We gave him his medicine and the next day he was thankfully back to normal. I’m still not sure if we made the right call keeping him on the ice, and I suspect that we’re going to have a lot of similar decisions to make in the future. But that’s just part of managing epilepsy, and trying to give my kid as many things back that his condition has tried to steal from him. He won’t get it all back, but every little bit counts.