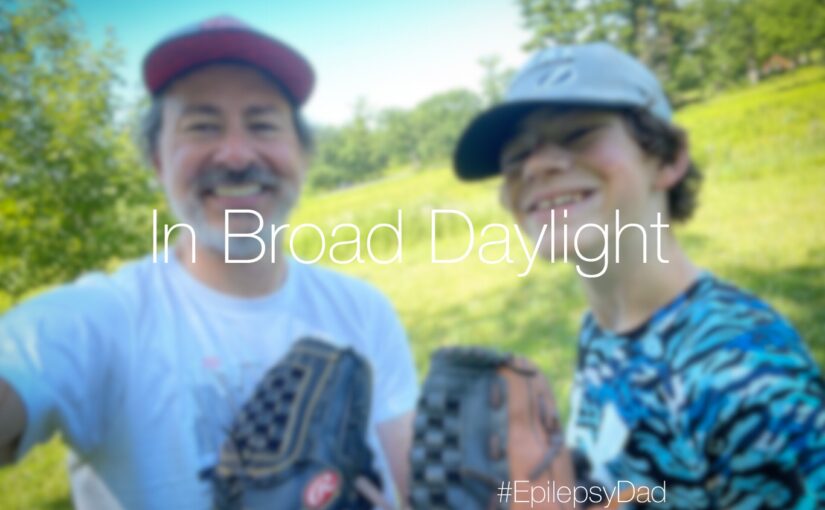 Baseball season may be over, and my son and I have started playing catch almost every day in the yard. He had such a good season, and hearing stories of how professional athletes practice every day inspired him to do the same.

I remember playing catch and baseball with him when he was younger. We started with a padded, big-barreled bat and a stuffed ball. I’d gently toss the ball, and he would mostly pick it up from the ground and try to throw it back. It was a huge milestone when he started to catch the ball.

As he got older, we moved up to a baseball and glove. He struggled, like most of us, to work on those muscles to squeeze the glove closed when he caught the ball, so sometimes the ball would fall out. But as he got older, stronger, and practiced, those muscles and the softening glove made it easier to keep the ball in the glove.

Over the years, we introduced ground balls and popups, with the ground balls getting faster and the popups getting higher the older and more skilled he got.

I have these thoughts as I watch him now, catching balls on the backhand and making solid throws into my glove. I can throw it harder to him, and he can throw it harder back, creating a solid smacking sound as the ball hits the glove. If I don’t catch it just right, sometimes I’ll feel a sting in the palm of my hand or on my thumb if the ball doesn’t catch the netting correctly. I’ll exaggerate a grimace, and my son will feel like he threw the ball as hard as a major league player.

It’s to the point now where we will take turns catching the ball, flipping it into the air with our glove, catching it casually in our throwing hand, and returning the ball in a series of smooth motions. Sometimes he’ll add a spin or flip the ball up between his legs and catch it. Such showmanship!

It’s been so amazing to come home after work and for him to ask me if I want to go outside and play catch. “Of course,” I’ll say. Spending one-on-one time with him every day is important, and playing catch with your son is something most dads aspire to, and we’re doing it. No matter how tired I am, even if we only play catch for 15 minutes, it’s worth it. And I know he enjoys it, too. Even after a long day at school, he’ll come home tired and rest for a bit, but then ask me to play catch when I get home.

The other day, we went out to play catch. After a bit of warming up, we started walking farther apart to increase the distance. As we did, we began to both add flair to our catches before returning the ball.

My son threw the ball a little low, so I bent down to catch it in my glove. I stood to return the ball and, at first, thought he was doing some kind of dance while waiting for the ball. A few seconds later, I dashed across the yard. It wasn’t a dance. It was a seizure.

The seizure wasn’t very long, but I got to him before it ended. He was still standing, his hands stiff in front of him and his body jerking in rhythmic motions. Once that stopped, I helped him sit on the ground.

He was postictal, his lips smacking as he started to come around. I rubbed his back as we sat on the grass, telling him that I loved him and that he was going to be ok.

It struck me as I sat there with him that I hadn’t seen a seizure like that in person in a long time. Usually, I see them through the camera in his room. There is a sense of routine to those. I wake up and watch the monitor to see if I need to go to him, but most of the time, he rolls over and simply falls back to sleep.

But this one was right in front of me, in broad daylight. It reminded me of the seizures he would have playing tee-ball. The seizures would attack in broad daylight, in front of everyone, as my son tried to play. It was hard not to be brought back to that time as the feelings of fear and desperation that I felt back then tried to resurface. I did my best to push them away and comfort my son, hoping this was an anomaly rather than a sign of things to come.

Once he recovered, I brought him inside to cool off and rest. My wife came down, and we sat on the couch and watched a movie as a family. I watched my son as we settled in. I don’t think he remembered what it was like to have a seizure, either, and I could see him work through his feelings. Eventually, he leaned into my wife and focused on the movie, little laughs coming as the characters did something funny. I started to let my guard down, too, and settled next to him.

Eight years in, seeing a seizure doesn’t get any easier. But the way we respond, with compassion and love, helps connect us and push away the fear and the darkness.