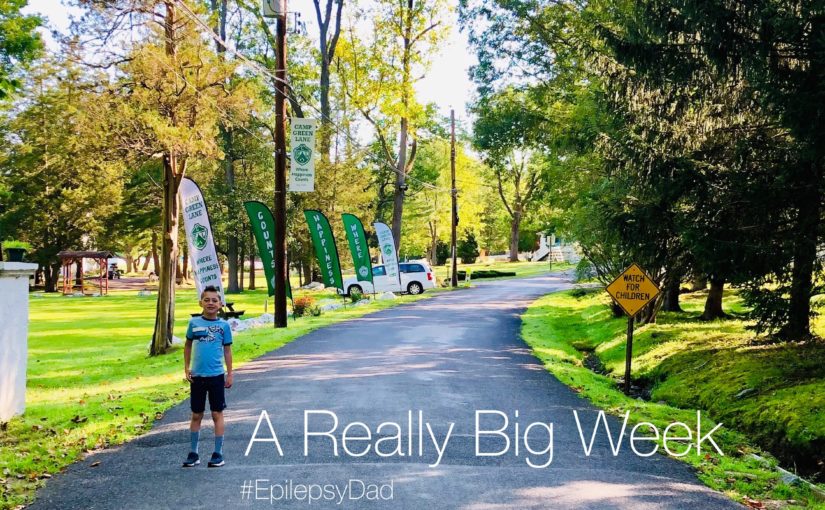 Over the summer, two huge things happened during the same week.

Professionally, I delivered a keynote speech at a conference. I’ve given many presentations before, and public speaking is something I want to do more. But this was much bigger than any talk that I had given previously.

I started to prepare for my talk weeks in advance, but, at the same time, another important event was looming on the horizon. The same week as the conference, we would be dropping our son off at sleepover camp for the first time.

Our son has rarely spent a night without either my wife or me there. And, when I say rarely, I mean once. No sleepovers with friends. No nights with the grandparents. One night in his entire life he spent with our nanny so my wife and I could go on an extended date night in the city and stay in a hotel, three blocks from our home. And now, we were going to send him away for a week.

Our local Epilepsy Foundation affiliate runs a program called Camp Achieve that is tailored to the needs of kids with epilepsy. It’s a week-long summer camp where the kids do proper summer camp activities. They swim and play tennis and have water balloon fights. They’re surrounded by other kids that are like them. Many of the counselors are former campers, and they are rounded out with volunteer doctors and nurses and other medical professionals. We knew and trusted so many of the volunteers because they were our nurses and friends we met through the Epilepsy Foundation.

When I was still weeks away from the overlapping events, working on my speech provided a distraction. But as we got closer to camp week, I was having difficulty focusing. I didn’t work on my speech as much as I wanted to. I also wasn’t dealing with the impending separation from my son. Before I knew it, it was time to drop him off.

In life, there are easy days, and there are hard days. The day we dropped our son off to camp was a tough day. I was so focused on the process of checking him in that I was unprepared for when it was done, and we were shown to our car. The rest of drop-off day was a waste, as was the next day as my wife and I checked Facebook every two seconds to see if the camp had posted any pictures of our son.

But the conference was still happening, and it was only a few days away. I needed to focus and, thankfully, my wife helped, and her performance background proved instrumental. We spent the next few days shifting our attention away from Facebook (it helped that we started seeing pictures) and towards my talk. But each of those days was an exhausting marathon trying to keep my attention where it needed to be. Every night, I felt like I had given everything and crashed hard, only to repeat it the next day. Eventually, there were no more days.

The day of the conference was the day before we would pick up our son. It felt like I just needed to get through this one, really big, last thing. Even though that morning, I couldn’t remember any of what I was going to talk about, I somehow managed to calm my nerves enough to deliver what I was told was a solid talk. The euphoria after the conference was a mix of relief and excitement. My wife and I celebrated making it through the week with an intense ping pong competition, then went to bed knowing we’d see our boy in the morning.

Pickup day was an orchestrated event, so even though we saw him outside his cabin, we resisted the urge to run over to him and hold him. But my heart felt so full when he signed “I love you” to us with a tired smile. When the ceremony was over, I held him so tight, and it felt like the perfect reward for making it through the week.

My son had a great time and wants to go back. Next year, though, I won’t sign up for anything the week of the camp. Maybe my wife and I can even go away together.

Just not too far away.

3 thoughts on “A Really Big Week”